Claire Milner creates art for environmentalists, conservation organisations, celebrities, large corporations and advertising agencies. Her works have been displayed in institutional and museum exhibitions and are held in private collections around the world, including the crystal portrait of Marilyn Monroe commissioned for Rihanna. Her paintings have been featured by The BBC, BLOUIN ARTINFO, Channel News Asia, Elle, Forbes, HuffPost Arts, The Telegraph, The Times, Vogue. They have been described as “metaphors of our time” in examining the effects of humans on the environment and other species. The main body of her work focuses on threats to the natural world.

What’s your background as an artist, and how would you describe your style?

I have a degree in graphic design and typography, have worked as an illustrator, studied ancient mosaic techniques and eventually combined all of these skills into my own style as an artist. I work in themed collections with art historical references that simultaneously focus on topical issues relating to the environment, our place within it and encroachment upon it. The effects of humanity are implicit within my paintings, even when the human figure is absent or takes a secondary precedence. Can you tell us a little bit about your work? How did you come up with the concept and how did you bring it to life?

My process involves traditional painting techniques and rigorous mosaic methodologies. It has evolved organically from early illustrations in paper collage, to mosaic, and more recently to paintings incorporating crystal mosaics. In a series of thematic and technical juxtapositions, the work utilizes construction and deconstruction to demonstrate appearance and disappearance. Creatures created from thousands of individual elements represent the last of their species and precious crystal mosaics are undercut by painted backgrounds as a metaphor for abundance and loss. The works confront minute detail and the big picture simultaneously, contrasting the profound and the superficial to accentuate the human capacity for greatness and great harm. What ignited your mission to raise awareness through your art? Is there a particular moment or realization that inspired you to focus on the relationship between civilization and the natural world?

The subjects I pursue, relate to the personal values I have held all my life, yet now they are universal and reaching a critical tipping point for everyone. Climate change, ocean pollution, environmental degradation, habitat loss and the rapid rate of extinction are all issues that could have devastating implications and also represent some of the largest challenges we face. Art doesn’t exist in a vacuum; artists throughout history have interpreted the critical issues of their time. The international language of art is a means of reaching a wide audience with accessible yet critical messages. I value my many wonderful clients and commissions that enable me to use the privilege of being an artist and the power of art to raise awareness of the significant issues facing our planet, as, without urgent action on these momentous issues, we may not have the luxury to concern ourselves with others. 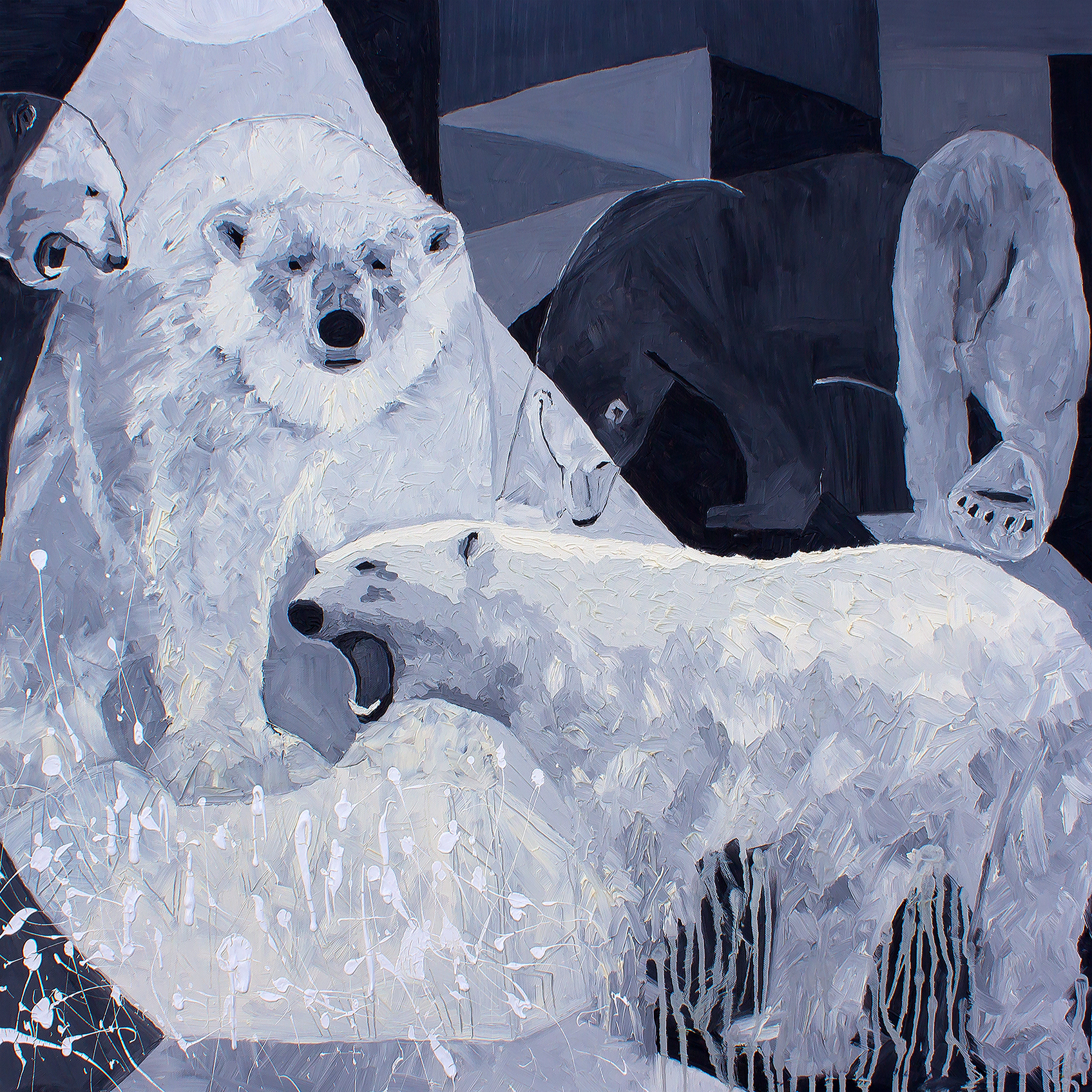 What’s one of your favorite experiences of your career as an artist and ocean advocate?

Oceans cover the majority of our planet, but little is known about their depths. The life forms surviving in these hostile environments are thought by some to be the beginnings of life on earth. During the International Year of Planet Earth in 2008 designated by IUGS and UNESCO, I conducted extensive research and created a semi-abstract mosaic now owned by BBC broadcaster and Earth Scientist Dr. Iain Stewart. This artwork represents volcanic mid-ocean ridges or hydrothermal vents and life in the ocean depths and the materials used to exemplify those found around ocean vents, such as silver and gold, with text giving factual information and statistics. I was later thrilled to learn that UK scientists had discovered the deepest, previously unknown hydrothermal vents, in the Cayman Trough.

I have had a strong connection to the ocean since I was a child and still spend part of every year at the coast on or beside the ocean. I am currently working on a huge ocean themed wrap-around artwork where each painting connects with its predecessor, yet also exists individually, representing symbiosis. It begins at the coastal ecosystems and moves into the open seas and the Mariana Trench in the ocean depths. As a lifelong vegetarian and environmentalist I constantly research issues facing the planet and the paintings I create are an interpretation of this research. My latest collection entitled ‘ANTHROPOCENE XTINCTION’ is a reflection of the impact of humans on the planet. These paintings depict a crystal mosaic X on the face of the principal animal, which at once highlights their preciousness, and draws attention to their fate. 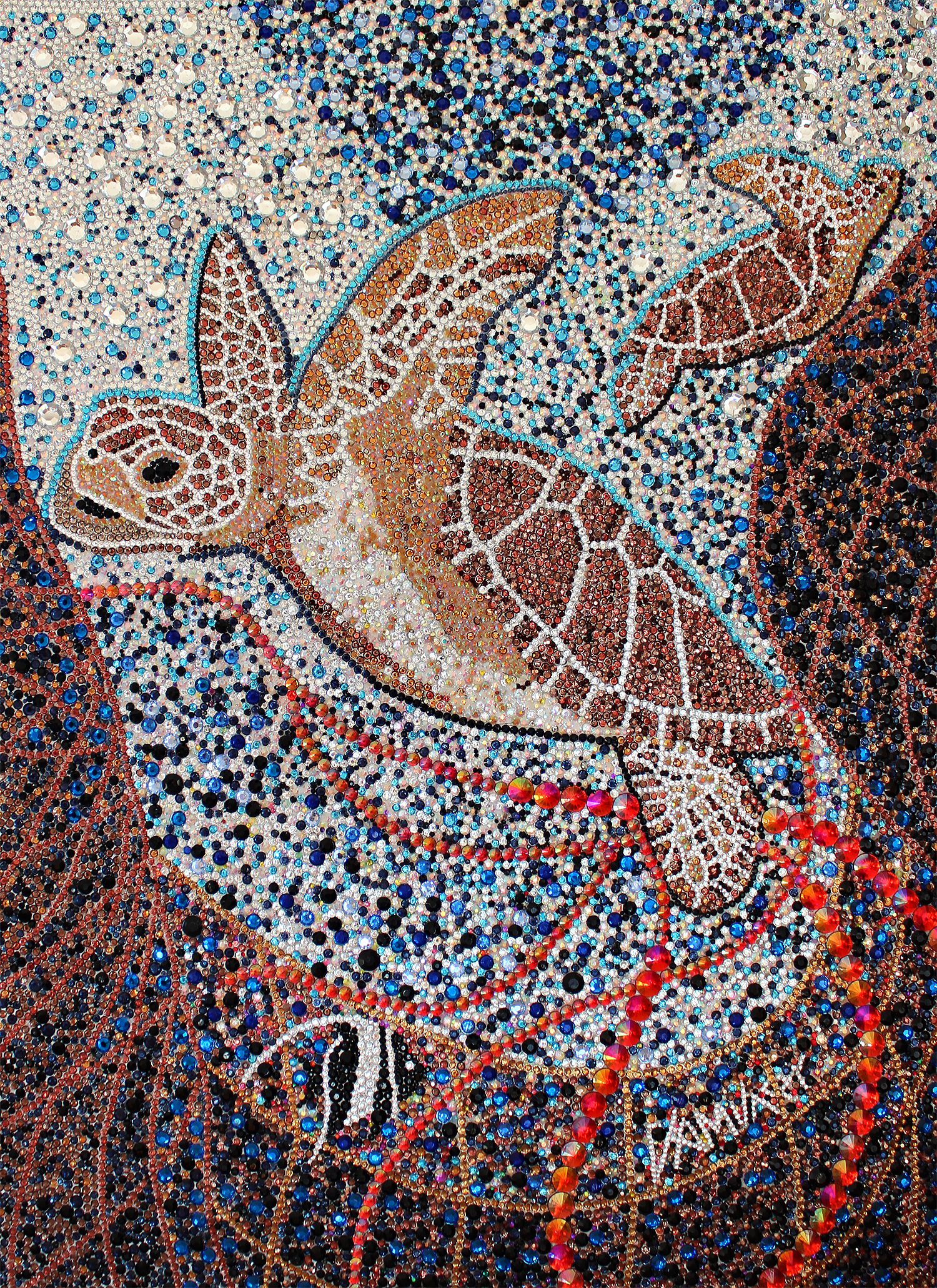 What reactions would you like people to have to your work and what message do you want them to take away?

I like to give the viewer something new to discover each time they look at my paintings. To engage people, I want them to have an initial emotional connection to the aesthetic qualities of the work, and from this starting point to be curious about questioning and understanding the more cryptic messages contained within. My work has been described as having many layers of meanings and discoveries to be made on closer inspection. If that incites further research or action on the part of the viewer or collector, then the work is a success.

Where can people see more of your work?

Enter text for this Artivist - leave blank for default